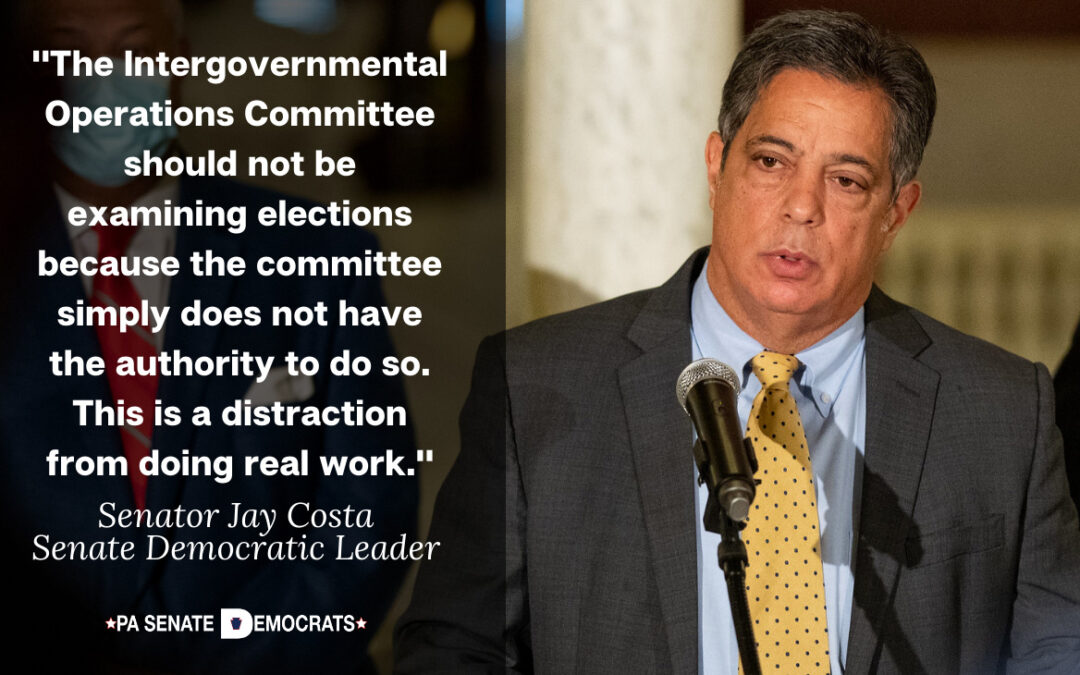 Harrisburg – September 9, 2021 – The Senate Intergovernmental Operations Committee held a hearing today to allegedly examine the PA Department of State’s evolving guidance to counties during the monumental 2020 general election. Testimony today from the Chairman of the Fulton County Commissioners and the Board of Elections revealed that despite all evidence indicating the elections in the county were run smoothly with regular communication and information from the PA Dept. of State, investigations occurred on Fulton County voting machines recommended by Senate Republican members with no information on who paid for such investigations.

“It is disgraceful that Senate Republicans have chosen to waste our time calling into question the legitimacy of an election that four of their members on the Intergovernmental Operations committee were elected in, and that have been certified and held up in numerous courts of law,” Sen. Anthony H. Williams (D- Delaware/Philadelphia), Democratic Chair of the Intergovernmental Operations Committee, said.

Senate Democratic Leader, Jay Costa (D- Allegheny) continued, “The Intergovernmental Operations Committee should not be examining elections because their committee simply does not have the authority to do so. Despite this fact, we heard in sworn testimony today that the Department of State did their due diligence in effectively communicating with counties about new voting procedures as a result of Act 77 of 2019 and the further implications of an unprecedented global pandemic.”

Fulton County Commissioner and Chair of the county Board of Elections, Stewart Ulsh, said in today’s hearing that in his five years and a half years overseeing elections, he has never had so much contact with the Pennsylvania Department of State. Ulsh stated, under oath, that despite numerous changes to voting procedures as a result of Act 77 of 2019, Fulton County found no fraud in their elections and faced no major challenges in conducting the 2020 elections.

During the hearing, Sen. Steve Santarsiero (D- Bucks) asked Ulsh about the election assessment conducted in Fulton County by Wake Technology services and published in February of 2021.

Ulsh said that he felt an investigation was needed after the November 2020 elections, and a member of the Senate Republican Caucus gave him the name of Wake Technology Services for the purposes of reviewing the Fulton County 2020 lection.

Ulsh repeatedly stated that he does not know where the money came from to pay Wake Technology Services, even though they were given full access to voting information in the county, and Ulsh was also unwilling to answer why a draft report of the election assessment was altered before being posted to the county website to include information regarding potential issues with county voting machines.

Despite insistence by Commissioner Ulsh that the report by Wake Technology Systems listed who paid for the assessment, no mention of this is found in the actual report found in full on Fulton County’s website.

Members of the Senate Democratic Caucus said they found it extremely disconcerting that information about payment regarding county election assessments is being withheld from the public domain.

Sen. Vincent Hughes (D- Montgomery/Philadelphia) also stated in the hearing that reporting has shown that Commissioner Ulsh, along with fellow Fulton County Commissioner Randy Bunch, contacted sitting Republican members of the legislature to urge them to support the calls of former President Trump and Sen. Doug Mastriano (R- Adams/Cumberland/Franklin/York) to label 2020 as rigged and stolen election, despite absolutely no proof of any wrongdoing.

“There is a nationally-orchestrated effort to deny people the right to vote,” said Sen. Steve Santarsiero (D- Bucks), member of the Senate Intergovernmental Operations Committee. “It’s a scam. We are standing up to protect our citizens’ right to vote and not allow some elected officials pick the winners. It’s time for us to focus on protecting our communities, our healthcare system and our economy from the ravages of the pandemic. It’s time for us to focus on helping our residents and businesses racked by the damage of tornadoes and floods that are the effects of climate change.”

Senate Democrats continue to assert that it’s time to move past further review of the fair and credible election results of 2020 and get down to doing the people’s business. This includes actual improvements to the election system that the counties are requesting to assist them in carrying out elections more efficiently. Items like pre-canvassing of mail-in ballots, drop box security and ensuring sufficient resources to support poll workers as well as any new technology requirements are the Democratic Caucus’ priorities.