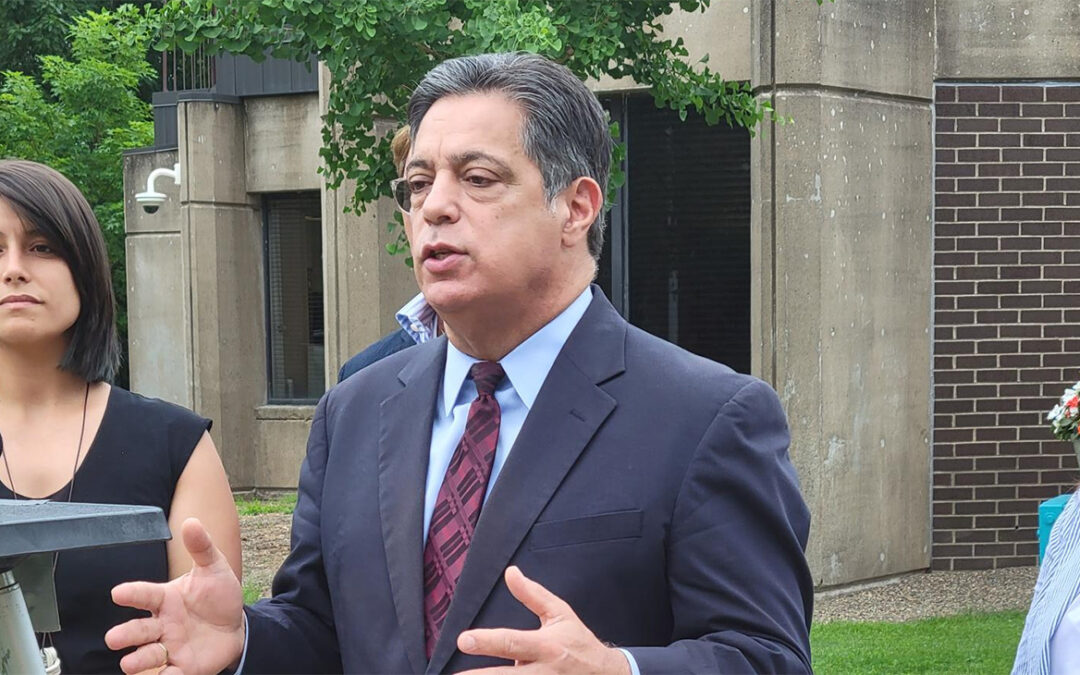 Statewide, PA − June 11, 2021 — As the projected state budget surplus surged to $3 billion and more than $7 billion in federal aid remains idled by inaction, Senate & House Democrats gathered in front of local schools across Pennsylvania on Friday to call for immediate release of funds to end the scourge of toxic and dilapidated school buildings in Pennsylvania.

Elected officials and local leaders in four different regions of the commonwealth talked about how widespread health and safety concerns affect school districts large and small across the commonwealth, where school infrastructure has caused illness and even death to those who are forced to occupy them every day.

“We are here to put an end to the excuses,” state Sen. Vincent Hughes, D-Philadelphia, Montgomery said outside the century-old Overbrook High School where students go without water in science labs and duck pieces falling from the auditorium ceiling. “It’s budget season and the annual excuses that have kept our children trapped in toxic schools are as old and worn as the schools themselves.  Enough.  We have the resources to end this embarrassment right now.”

Democrats are seeking immediate investment in schools across the Pennsylvania, one of only 22 states that has failed to remove lead from school drinking water and where infrastructure has been rated C- by the American Society of Civil Engineers.

“Something as simple and arbitrary as a zip code determines the quality of buildings and facilities a student will have to learn in,” he said.  “This isn’t right and it’s not equitable, but this year we have the opportunity to level the playing field. With $7 billion in federal funding and a $3 billion surplus, we can address aging infrastructure in every district in this state that needs it.”

Senate Democrats and Gov. Tom Wolf have been urging the General Assembly for years to protect students, teachers and staff with investments in our schools that would also create thousands of jobs.  Still, news outlets continue to report lead in drinking water, asbestos pollution, and even carbon monoxide dangers in Pennsylvania schools.

Sen. Carolyn Comitta, a member of the Senate Education Committee who spoke said investment of surplus and American Rescue Plan funding would be benefit both students and local economies.

“Every child deserves the opportunity to attend school in a classroom that is a safe, healthy, and productive environment for learning,” she said. With significant ARP funding, we now have a golden opportunity to upgrade Pennsylvania’s school facilities and address problems like mold, asbestos, and lead that are hazardous to the health of students, young people, and teachers. We can fix our educational facilities, create jobs, and prioritize the recovery of both our economy and our schools in the process.”

Under the state constitution, Pennsylvania’s annual budget must be passed by June 30.

“The renovation of schools has been deferred for far too long,” said Sen. Art Haywood, who represents schools in both Philadelphia and Montgomery counties. Now is the time to clear the asbestos, mold, lead, and water. We must fix poor ventilation and other hazardous conditions.”

“We cannot send our children into schools with overcrowded classrooms and broken heating, and expect them to thrive,” he said. “How can students succeed when their schools are failing? Thanks to a historic investment from the American Rescue Plan, we have a real opportunity to deliver on our promise to Pennsylvania’s children by giving schools the resources they need.”

Sen. Anthony Hardy Williams, who represents Southwest Philadelphia and parts of Delaware County, said students exposed to the neglect of their schools can have that reflected in their performance.

“We must invest money that is readily into school buildings across Pennsylvania. It is appalling that we continue to allow students to sit in classrooms, walk hallways, and drink from water fountains that may be contaminated with lead, asbestos, and numerous other dangerous toxins,” he said.  “How can we expect students to care about their education if they don’t feel like we are committing and investing to them and their learning environment? We need to fund our facilities and invest now in the students of Pennsylvania.”

Sen. John Kane, who spent decades as a union plumber, said he has seen first-hand the materials once used routinely on large building projects.

“I’m from the construction industry – I spent four decades there,” he said. “There are materials in these buildings that we have learned are dangerous and need to be replaced. And the longer we go without doing that, the more we’re putting our students, our teachers, and our school administrators at risk. It’s that simple. It’s time we all do our jobs to right this wrong.”

Sen. Sharif Street, whose North Philadelphia district is one of the least wealthy in Pennsylvania, said education funding is at the root of economic disparity.

“There has never been a better opportunity to fully and equally fund education in Pennsylvania. With $3 Billion in unprecedented budget surpluses, there is no greater priority than making sure our kids have the resources they need to succeed in rural and urban districts,” he said. “Property taxes, new business and even where people choose to start a family are all linked to education funding. Investing in our students will allow us to grow our economy, population and the next the next generation of Pennsylvania.”

“Healthy communities, in which people of all ages have what they need to thrive, do not exist without healthy schools,” said Saval. “COVID has laid bare the dire conditions of school buildings throughout the state, but organizers, teachers, school administrators, parents, and children have fought long and hard to call attention to the urgent need to repair and update the crumbling infrastructure. We have an incredible opportunity, right now, to respond to their calls.”

“Now, more than ever, COVID-19 has shown the need for removing all known health hazards from our classrooms as well as providing proper ventilation systems. An unhealthy learning environment leads to overcrowded classrooms and long-term health issues for students and educators. Our six neighboring states all have existing programs to deal with health and safety hazards in their public school buildings. There is no reason Pennsylvanians can’t move to protect our students in the same way,” said Senator Marty Flynn. “In the past, opponents of fair funding have claimed that more money for broken schools means less money for other schools.  The ARP funding eliminates that excuse.  The money is there. We have an opportunity to do the right thing now.”