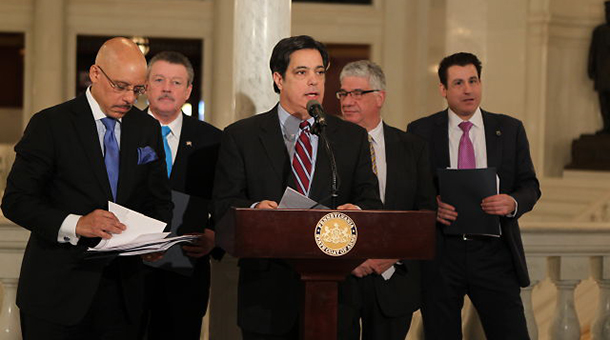 Harrisburg – Nov. 10, 2015 – Senate Democratic Leader Jay Costa (D-Allegheny) said today that he was pleased that a framework for the 2015-16 state General Fund budget has been crafted and that significant progress has been made toward a comprehensive agreement.

Costa joined Gov. Tom Wolf, House Democratic Leader Frank Dermody (D-Allegheny) and Republican leaders of both the House and Senate at a news briefing outside the governor’s office today to announce the budget framework.

“While there is more work ahead, I am pleased that a budget framework is in place that may put us in position to consider a comprehensive budget agreement in the near future. What we announced with the governor today was an outline of a plan that leaders of both parties can take to their members once details are finalized.

“The hope is that the process can be concluded shortly and that a full general budget plus historic agreements on key issues will be before the General Assembly within the next couple weeks.

“Today’s announcement was a positive development. Clearly, there is momentum and both Democrat and Republican leaders are working with the governor to reach consensus on the details of a spending plan that addresses key priorities.”